Data scientist Jen Lowe literally put her heartbeat up on the Internet. One Human Heartbeat is a site that pulses as her heart beats – or at least on a 24 hour delay. Statistics in the bottom left of the screen show her BPM and even expected days remaining. Heavy.

Jen describes it better than I ever can:

I’ve put my heartbeat on the internet.

It’s March 25, 2014 and the best technology I’ve found to save my heartrate is the Basis watch. It saves an average heartrate for each minute. It fails to record any heartrate for ~17.5% of minutes. When there is no data for a minute, you’ll see the heartrate from the previous minute.

This really works for me on a number of levels. Obviously there’s neat tech, described in her writeup on what’s involved, but there’s also something about connecting herself to her work in this way that feels really thoughtful and inspired. It’s one thing to say that as a society we’re always connected to the Internet – this is something else entirely. There’s something to be said here about privacy, personal data and openness. Yet more on healthcare. I’m not sure exactly how to describe what Jen has done here but it feels like there’s something soulful and refreshing in this project to me.

One Human Heartbeat by Jen Lowe 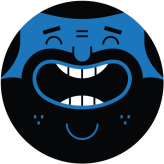