@HelloEnjoy recently announced the launch of “Lights”, an interactive music experience set to Ellie Goulding’s single of the same name.

It’s immediately obvious how much effort Carlos and Libertad have put into this. It’s beautiful.

three.js and web audio combine to take the viewer over a pulsating terrain that responds smoothly to variations in the backing track. Your sparkling avatar can be directed and accelerated using the mouse, while a quick prod on a sphere encourages an eruption of colourful particles.

The floating Twitter handles of those who’ve mentioned the project are a nice final touch.

Random fact: I met Carlos at one of Seb‘s workshops, he happened to mention in passing that he prefers to work in radians rather than degrees.. dang. 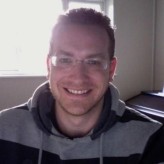