We see a lot of particle effects here on CreativeJS, and every now and then a demo stands apart from the rest. GPU particles is an beautiful interactive particle experiment by creative coder Justin Windle (@soulwire). Amazingly, all of the physics calculations are done within a shader, meaning the GPU does all the heavy lifting, allowing the WebGL context to render a whopping 1,048,576 particles at 60 fps.

The project is open source and was itself, part of a much bigger talk about dissecting WebGL (which is definitely worth checking out as well). 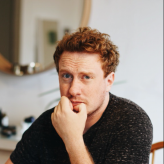